After weeks of dialogue framed around voting ‘yes’ or ‘no’ on a constitutional amendment, are there other discussions worth having about abortion?

Kansans voters spoke in an election on Tuesday, with 59% voting against an amendment that would have declared that there is no right to an abortion under the Kansas Constitution.

With Kansas being the first state to weigh in on abortion since the U.S. Supreme Court overturned Roe v. Wade in June, the election drew national headlines for the outcome and the unprecedented turnout for a primary election. More than 900,000 of the state’s 1.9 million registered voters cast ballots, about double the number that voted in the same primary four years ago.

Voting sites that had been quiet in years past saw voters lining up for their turn, in some cases waiting a few hours to cast their ballots.

As a result of the vote, a 2019 Kansas Supreme Court ruling protecting abortion access remains in effect. But the debate over the issue is far from over, especially with the national mid-term elections looming on Nov. 8. 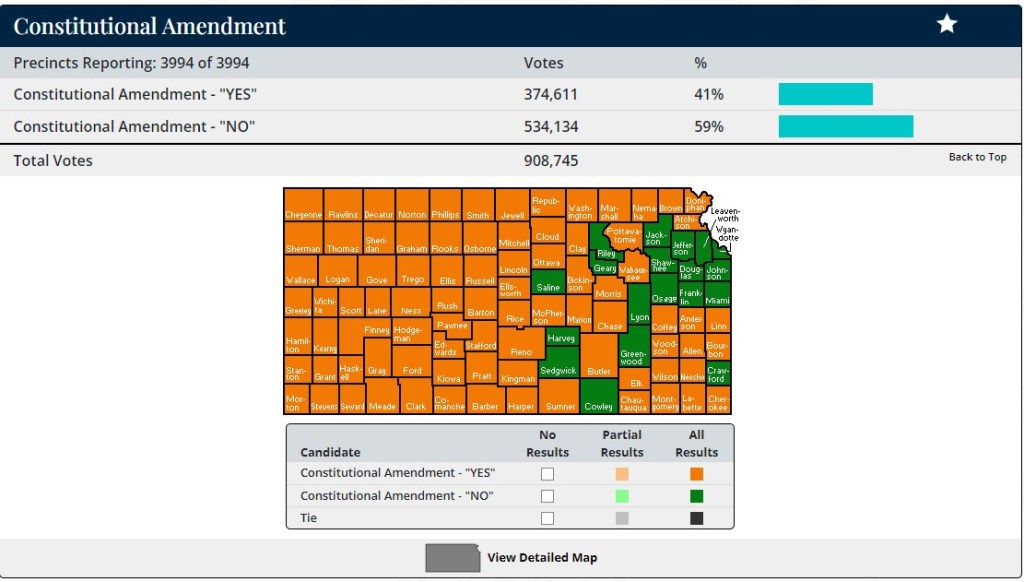 Considering that, what conversations might be necessary now that we know the results of Aug. 2? I’m not entirely sure yet, but I hope at least some of them will look like The Journal Live discussion we had on abortion just a few days before the election.

As part of our forum, I moderated a discussion among three Kansans who supported changing the state constitution and three Kansans who opposed doing so. Because of the heat surrounding the topic, we identified these voters only by their first names. Ashley, Ben and Catherine planned to vote “yes” for the Value Them Both Amendment, while Gloria, Kayla and Laura planned to vote “no.”

Despite their differing positions on the issue, which did not change during the discussion, I was impressed with the way our panelists conducted themselves during the dialogue. They didn’t just engage civilly, they went out of their way to acknowledge and validate each other at times, acknowledging complexity without giving up sacred ground. While it did get contentious, the discussion was never ugly or off-putting.

Some of this was due to how intentional our team was about setting up the conversation. We built the discussion around a set of questions inspired by the work of journalist Amanda Ripley to “complicate the narrative” around contentious issues. The hope was to use them to foster dialogue that was “more interesting, less polarizing and more complex.”

But mostly it was because of the quality of our panelists, who were chosen from among 700 respondents to a Journal survey on abortion. They embraced the opportunity to engage in a discussion with people who thought differently from them and remained curious in the face of conflict.

If you get the opportunity, I would encourage you to watch the video of their discussion. It gave me hope that there are conversations worth having after Aug. 2 that go beyond our divisions on this issue.

Politics is, by its very nature, contentious. There are winners and losers in every election. In my experience, though, it’s rare for any side to achieve a total, lasting victory or suffer a permanent defeat. We should be joyous about our victories, but also know that with each defeat, comes another election that also matters in its own way. What’s our responsibility to speak to each side’s wins and losses?

Voting is one way of speaking, and I’m proud that so many Kansans seized an opportunity to be civically engaged on this issue. I hope that we continue to choose other ways to be civically engaged, including ones that require us to talk with each other, across dividing lines, as we try to shape both the present and future of this state, this country and our world.

Chris Green is the executive editor of The Journal.