A year on, protesters satisfied with decision to join cookout – but not all the outcomes

Young Wichita organizers took a big risk in agreeing to a cookout
with police at the height of a summer of racial tension. More than
a year later, they answer the question: Was it worth it?

In today’s often polarized world, a zero-sum mentality has taken hold:
There are winners and there are losers, and there is no in between.
Working with the other side is scoffed at as a mark of retreat and defeat.

If you’ve been there, you understand. Compromise doesn’t necessarily feel great to either side. No one is elated. No one can claim moral superiority.

But the good-versus-evil battle that makes for such compelling drama on TV or the silver screen is ultimately little more than the name of the genre itself – fantasy. In the real world, shades of gray are everywhere, and it can exact a greater personal cost to work across factions than to draw a line in the sand.

Reaching out can advance your goals, but it’s also dangerous. You run the risk of being seen as disloyal to your own side or ending up with the lesser end of the deal.

These are trade-offs that three young African- American organizers from Wichita know all too well. In 2016, they took a calculated risk in agreeing to the First Steps Community Cookout with police at a time of heightened racial tension nationwide. Now, as they reflect on that decision a year later, A.J. Bohannon, Djuan Wash and Brandon Johnson are satisfied with the choice they made but not entirely content with outcomes it produced.

It started with a protest

Anger and outrage were mounting that July. In the early hours of July 5, Alton Sterling, a black man who appeared to be restrained on cell phone footage that circulated, was fatally shot by two white police officers in Baton Rouge, Louisiana.

The next day, a police officer shot and killed Philando Castile, a black Minnesotan, at a traffic stop in a Twin Cities suburb. His girlfriend live streamed the aftermath on Facebook as her 4-year-old watched from the backseat.

Days later, Wash and Bohannon led a peaceful march along 13th Street in the heart of a historically black neighborhood to protest the disproportionate deaths of African-Americans by police officers. Brandon Johnson and his daughter were among the hundreds who attended. Troopers and deputies blocked freeway ramps to avoid disrupting traffic there but otherwise did not impede the protest. But the organizers wanted to make progress on racial injustice, and they believed cultivating relationships with the police was an important means to that end. The police had built up trust through their handling of the protest along 13th Street, and now the organizers had an opportunity to display their confidence in the sincerity of the chief and his officers.

Wash, Bohannon and Johnson thought it was important to exercise their right of assembly, but that did not preclude them from building a relationship with Wichita’s new police chief, Gordon Ramsay. In fact, as Wash was marching, he was on the phone with Ramsay.

Wash, Johnson and other members of Wichita Urban Professionals, an ethnically diverse under-40s group, had met with the chief beforehand, and the chief had promised three things: to advocate for independent prosecutors in police-involved shootings, to require cultural competency training for officers, and to establish an independent civilian-police review board.

Wash says the relationship between leaders of Wichita’s black community and Ramsay had been developing since Ramsay’s interview the previous December and subsequent hiring.

“We didn’t see what you see in other cities with police on the scrimmage line,” says Wash, a field organizer for the American Civil Liberties Union. “The most important part was to explain the changes the police had committed to, and also an opportunity for the community to voice their concerns.”

“I’m kind of rough around the edges,” Bohannon says. “They go to the courthouse. I go to the basketball courts.”

But the peaceful protest had been successful. And they had the ear of the police chief, who had made overtures to their priorities.

The day after the march, Bohannon and Wash met with Ramsay and Herman Hicks, pastor of the Greater Pentecostal Church of God in Christ, according to The Wichita Eagle. Hicks, who like Johnson, is an alumnus of the Kansas Leadership Center, had protested in college decades earlier. He had reached out to the younger organizers to provide guidance.

At a follow-up meeting, when Ramsay suggested a community cookout instead of another protest, the group had some thinking to do.

Bohannon, manager of a wireless phone store who is also working on a teaching degree, was less than enthused. “At first, honestly, I didn’t want to do it because I felt it was their way of silencing us,” he says.

Johnson was wary, too. “Initially, we were kind of unsure because of where the community was, temperature-wise,” says Johnson, who won a seat on the Wichita City Council in November. “We were worried about pushback.”

The organizers decided that if the barbecue included a question-and-answer session with law enforcement, then it would be worth it to them to attend and publicize it. They also knew a few might see them as sellouts. 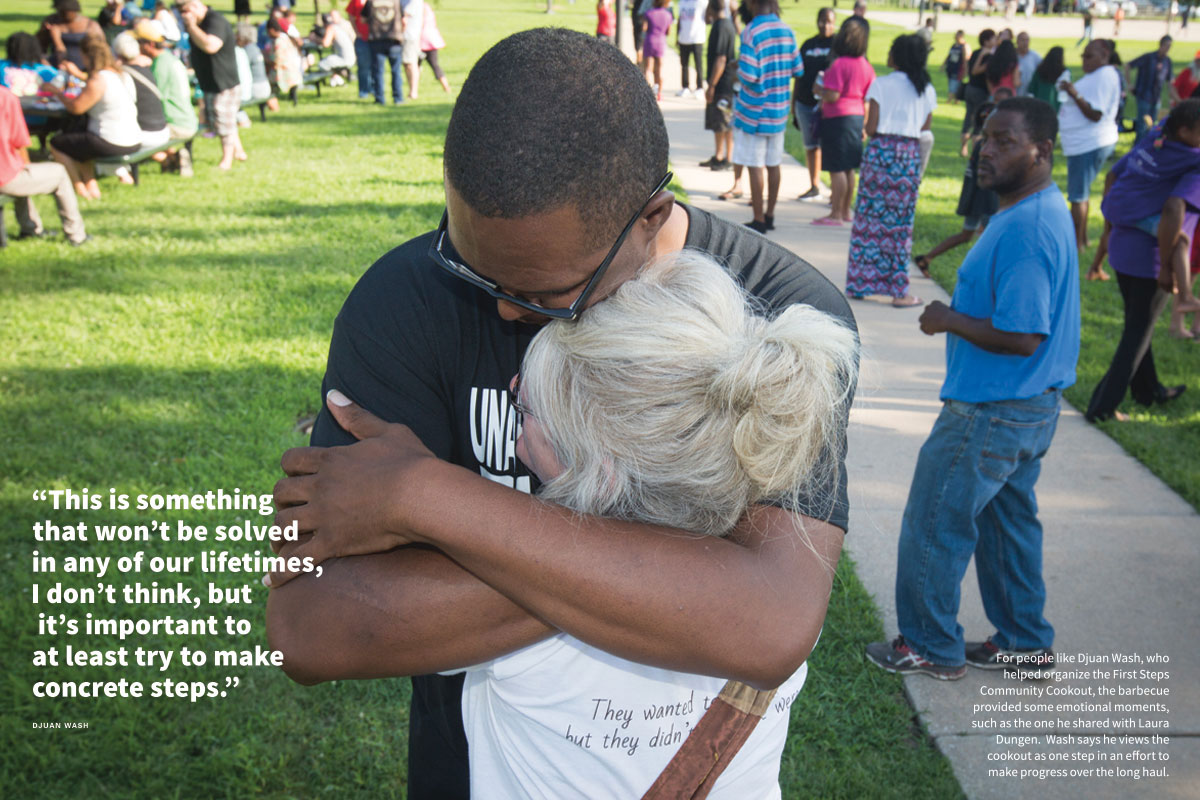 “I feel like it was the right decision,” Johnson says. “Since we did commit to it, if it was a success, we’d have more leverage in the department. … We took the olive branch.”

In Wash’s view, a protest accomplishes only so much. It raises awareness, but it must be accompanied by clear demands and goals for policy change. “You have to know how to leverage that power,” he says. “Who is the decision maker? Who has the ability to make changes?”

Wash wanted to improve relations between the black community and law enforcement, and agreeing to the cookout was a strategy to advance that goal.

“Of course it was tough to sell back, because people don’t trust the police,” he says. “It’s important for both groups to get together to recognize each other’s humanity. You’re less likely to shoot someone you have a relationship with.”

The agreement to the cookout resulted in the cancellation of another protest. That event was not being organized by Wash, Bohannon or Johnson, but by B.J. Jones, a local father who worked in aircraft manufacturing, according to The Eagle. Jones, who had never been to a protest before, was initially skeptical of the cookout, The Eagle’s Oliver Morrison wrote, but ultimately agreed to support it, with the help of some urging from Hicks.

So on July 17, the Wichita Police Department hosted a barbecue at McAdams Park in north Wichita just off 13th Street – the site of the peaceful protest just days earlier. The pleasant summer weather and good turnout stood in contrast to the dark events happening nationally.

Earlier that day, a black man angered by the recent police shootings killed three officers in Baton Rouge. But the First Steps Community Cookout in Wichita went off without a hitch.

Law enforcement officers, most in uniform, attended, as did residents of all ages. Nearly 2,000 people ate, danced, laughed and had serious discussions – and then as promised, the open forum took place, and community members had an opportunity to air their concerns and grievances.

In the aftermath of the event, though, what went viral was video of a white officer dancing at the cookout. Ramsay was even invited to the White House to discuss community policing, although he had a conflict and was unable to go.

This coverage didn’t please the organizers, who could control their decision to participate but not the outcomes from that choice. “I didn’t like the type of attention it got,” Wash says.

Johnson says it remains frustrating that the majority of people who talk about the barbecue only give credit to Ramsay. Especially since Johnson took major heat himself for weeks afterward, including being called a traitor.

There were local critics as well. “All of the people we have seen sharing the (cookout) story like it’s a good thing,” one man, Antar Gholar, told Morrison of The Eagle. “We’re like, no it’s not a good thing, nothing has changed, no policies have changed.”

Even though they knew the decision to participate in the cookout wouldn’t make everyone happy, the criticism still stung. “I really took some time to let it absorb,” Johnson says.

Johnson doesn’t blame people for being skeptical. He understands the deep mistrust that black Wichitans often have for law enforcement. “We each have had our own situations with law enforcement,” he says.

Johnson says he was arrested at age 19 at a community festival for trying to stand up for two people against whom police used excessive force. Bohannon was arrested after wearing a hoodie to Towne East Mall in the days following the killing of Trayvon Martin, a black teenager who was wearing a hoodie in a gated Florida neighborhood.

Wash says an entire movement to address unjust lethal violence against black people was birthed out of Martin’s death. “That kind of woke people up,” he says. “People began to recognize the need to make your voice heard whenever injustice occurs.”

All in all, Johnson is happy that a dialogue is ongoing between black Wichitans and law enforcement. “I don’t know what year two looks like,” he says. “There are new people building relationships every day. People have a cautious hope for Chief Ramsay.”

Bohannon is more circumspect in his assessment. He was pleased with the Q-and-A session at the cookout, but he wants to see more community policing – more officers talking to people at the grocery store and elsewhere. He also wants more African-Americans to have positive interactions with police so that both groups handle crisis situations better.

“The whole job with policing is not just finding people who are doing wrong,” he says. “I don’t really see anything has changed.”

For his part, Wash has the long game in mind and remains positive about the cookout. “It really was a first step,” he says. “We’re talking about an issue that has persisted for generations.”

From the African-American perspective, Wash says, policing has always been complicated and oftentimes oppressive: “This is something that won’t be solved in any of our lifetimes, I don’t think, but it’s important to at least try to make concrete steps.”

While the organizers have differing opinions on the headway made since the cookout, they don’t regret the compromise. In order for protests to lead to progress, they had to be willing to maintain a dialogue with police. They took heat personally for agreeing to a barbecue but were willing to do it for the greater good in the fight against racial injustice.

Bohannon says there will always be naysayers, but that for every one he encountered, there were 100 people who were supportive.

“I didn’t want to sacrifice the whole for one part,” he says. “One of the biggest things I took away from this whole thing was to be patient.”