A Thought and a Prayer

When the Moment Calls for Shutting Up

Sometimes the best thing to do is simply shut up.

That’s probably difficult if you lead in your community or workplace, where your opinions guide decision-making and influence the culture. And, of course, we live in a social media world, where Facebook and Twitter constantly demand our attention, prompting us to fill up the endless stream with a hot take or two.

But sometimes the best thing to do is simply shut up.

I realized this as the torrent of bad news in 2016 kept piling up – culminating, at one point, in a gunman’s attack on a gay nightclub in Orlando, Florida. Forty-nine people died, and 53 people were injured. How did we Americans respond? By arguing.

About guns. About Islam. About Islamophobia. About gays. About politics. About Donald Trump and President Barack Obama. Lost in all of it, it seemed to me, was a chance to be humble in the face of tragedy. The arguing seemed to compound the evil that had been done, by adding to the sum total of the world’s rage.

So I resisted entering the argument. Instead, I composed a prayer.

It’s here I should say that I’ve had a convoluted spiritual journey. It’s probably best to classify me as an agnostic, but I occasionally attend a local congregation in Lawrence, and I got my degree at a Mennonite college in central Kansas. You can take the boy out of the church, but it’s not always easy to take the church out of the boy. Sometimes prayer is the right response.

It’s a prayer I’ve dug up on occasion ever since. Living by its precepts – listen to other people; respect their differences – is difficult. And of course, silence can get us only so far: We must discuss the issues that divide us if we’re to have any hope of resolving them.

Sometimes, though, the best thing to do is shut up. At least for a little while.

Joel Mathis is a freelance writer who lives in Lawrence.
He blogs at joelmathis.blogspot.com.

A Thought and a Prayer

Lord, forgive me my need to make a point right away when tragedy happens instead of taking a moment to lament and grieve.

Lord, forgive me my refusal to see the fears that other people have and to understand how those fears shape their responses to each other, and to the tragedies of the day.

Lord, forgive me for failing to discern evil where it exists, and for inferring evil from mere disagreement.

Lord, forgive me for the anger that springs up in my heart when people refuse to give me and my friends the benefit of the doubt.

Lord, forgive me my failure to give the benefit of the doubt.

Lord, forgive me for any action that compounds the evil of an evil act.

Lord, guide me to help create peace and diminish injustice where evil is done.

Lord, forgive me my refusal to shut the hell up.

Lord: Comfort and bless the families of those who suffer tonight. 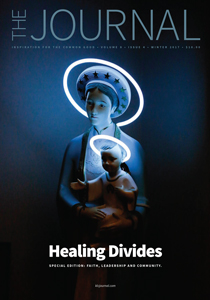 This article was originally published in the Winter 2017 issue of The Journal, a publication of the Kansas Leadership Center. To learn more about KLC, visit http://kansasleadershipcenter.org. For a subscription to the printed edition of The Journal, visit klcjr.nl/amzsubscribe

Emergency model offers way for rural hospitals to hang on