When McPherson College’s efforts to increase its retention of freshmen hit a wall, its president radically changed its approach. Although some were uncomfortable with that shift, it may well be reshaping the organization for the better.

The first gathering of McPherson College’s faculty and staff to discuss an initiative to increase freshman retention didn’t leave many people clamoring for a sequel.

The meeting, which took place in the fall of 2014, was heated and uncomfortable.

Ostensibly, employees of the private, four-year liberal arts college with an enrollment of about 700 shared a desire to increase the number of returning students and move them along the path to graduation. But starting a dialogue about how to meet the challenge exposed fissures no one knew existed. At times, it sounded more like a gripe session than an effort to solve a problem.

But nearly three years later, that stressful day is seen in a different light. What could have been a disaster has become something hopeful.

The process got its start when college President Michael Schneider was in Lawrence visiting the chairman of his board of trustees. During his visit, the latest retention numbers for McPherson College became available. They weren’t what the college’s president wanted to see.

Despite spending hundreds of thousands of dollars and involving more than a dozen people over a six- to seven-year period to improve retention numbers, just slightly more than half of all freshmen were returning for their sophomore year.

While many things were going well at the school, Schneider knew that the gold standard to measure quality at an institution like his is graduation rates, which comes down to recruiting and then keeping students.

“Why can’t we fix this?” he wondered out loud to Rick Doll, the then-superintendent of schools in Lawrence, who was serving his alma mater as chairman of the board. “None of the things we are throwing at this problem is working.”

Doll offered some advice: “Look at this from an adaptive standpoint instead of looking for a technical solution,” meaning that the challenge defied quick fixes and called for a broader reassessment of the college’s values and direction.

Doll pointed Schneider in the direction of the Kansas Leadership Center. Schneider followed up. And after learning about the KLC leadership competencies, he decided to impose that framework on his campus. He mobilized the board, his team of subordinates and eventually the college’s 46 faculty members and roughly 100 staff members.

Schneider took a diverse group of 20 faculty members, staffers and administrators – including his 12 direct subordinates, which make up his cabinet – to a two-day Kansas Leadership Center training session. The group decided to use freshman retention as the challenge to introduce the adaptive framework across campus.

McPherson College was hardly alone in facing retention issues (the national average at four-year private schools is 70.8 percent). But a large portion of its students are considered at risk based on demographics alone: More than half are athletes, 28 percent are minorities and a significant number are the first in their families to go to college.

If student body numbers were to continue to fall, the college would struggle to maintain program quality and fulfill its mission to develop whole persons through scholarship, participation and service. McPherson offers 21 majors, with more than 40 emphases and 10 preprofessional programs, ranging from business to its unique undergraduate offering in automotive restoration.

The KLC training session set the stage for an all-campus meeting to discuss the initiative in the fall of 2014. The goal was to mobilize the whole college to improve freshman retention and bring the organization together with a shared commitment to trying new approaches.

Competencies that originated from the Kansas Leadership Center – inspiring a collective purpose, working across factions, testing multiple interpretations and points of view, and creating a trustworthy process – were emphasized.

“I gave everyone permission that we don’t need to go up 10 percent in one year. We just don’t want retention to go down for the year,” Schneider says. “McPherson College has been around 130 years, and we’re going to be around for another 130 years if we can make incremental progress instead of feeling like we have to take home run swings and then missing.”

For many of those in attendance, it was the first suggestion that part of their job descriptions would include recruitment and retention. That raised the heat for everyone. Some faculty members said, “Whoa, our plates are full with what we were hired to do: teach.” Some staff members said they could hardly be expected to help because they didn’t know which students were freshmen. The admissions and student life departments – traditionally responsible for recruitment and retention – felt frustrated by peers’ pushback.

Meeting facilitators helped employees come to understand an underlying truth: If McPherson College doesn’t have students, nobody has a job.

Despite its name, even the dream team struggled with elements of the radical change in how the college was tackling an issue. In maintenance, for example, Bruton was used to applying technical solutions to daily problems. His confidence is low on adaptive work, but he says he has learned to trust the process and appreciates that it’s making him a better leader.

“The process has allowed me to step back and consider a bigger picture,” Bruton says. Sure, his team wouldn’t be able to identify first-time freshmen, but in the end that wasn’t really a barrier. Instead of walking from building to building with their heads down, he says, the maintenance team started making eye contact and greeting all students.

Hopkins, the music professor, is in his fourth year at McPherson College. And while he was open to a new way of working, he represented faculty that included professors skeptical of change. His effort was less talking the talk and more walking the walk.

Although the college has a long tradition of choir excellence, the band program was on life support when Hopkins moved from the local high school to the college. The semester before he arrived, the band’s numbers had dwindled to two, and Hopkins asked for recruiting duties to be part of his job. With 56 in band, 18 in jazz band, McPherson now has one of the largest small-college bands in Kansas.

“I have every major on campus represented in my group, and we’re creating a community within a community where students enjoy spending time every week making music together,” Hopkins says. “I take the community-building aspect of my program as importantly if not sometimes more importantly than the musical aspect. That’s a powerful retention component – not just retention for McPherson College but retaining them for a lifelong love of music, too.”

Hopkins counted himself among the skeptics after the first all-campus meeting. That session was so difficult that he told Stocklin-Smith he wouldn’t attend another. But Hopkins soon realized the encounter had been needed. Because of the compartmentalization that had developed on campus, the experience provided the first opportunity for employees to express themselves across factions.

As the meetings became routine, they became more productive and more comfortable. Solutions and best practices began to bubble up: professors showing up to class 15 minutes early to talk to students and create bonds, custodians greeting students by name and attending concerts or art exhibits, coaches organizing social events so student-athletes could build connections
with members of other teams, the Student Life department creating freshman-only floors in residence halls and staffing them with resident advisers picked to cater to freshman needs, and revamping and integrating the entire freshman-year experience, from orientation to seminars to outside-the-classroom programming.

“When you look at the programs and things we did, on the surface they won’t be that impressive,” Schneider says. “This really is about how we did it, and that the entire campus was engaged in it.”

After its first full academic year of giving the retention work to the entire campus, McPherson College increased fall-to-fall freshmen retention from 56 percent to 70 percent. It happened in the same year the school welcomed its largest freshman class in 40 years and while spending significantly less money on retention efforts.

Preliminary indicators suggest that the college will have similar retention results with this year’s group of freshmen. The most recent two classes are similar in size and demographics, giving the college a good year-to-year comparison.

While no one is claiming victory, cabinet members and the dream team think the strategy is working. The challenge is to maintain a focus on recruiting and retaining students, while resisting becoming complacent after one or two years of positive results. About 90 percent of McPherson’s employees have attended training on KLC leadership competencies, and they continue to send new hires through workshops.

There are other signs of progress, too. The Chronicle of Higher Education named McPherson College a “Great College to Work For” for the second year in a row based on an independent employee survey. It was the only college in Kansas to earn the recognition in 2016. Applicant pools have been bigger and more qualified, with many candidates mentioning they applied because of the ranking.

Furthermore, the institution has increased its capacity for adaptive work and for engaging broader groups of stakeholders in decision making. Schneider reinvented the way the college does strategic planning, moving from a committee planning process to a community planning process, allowing for some uncommon voices to be heard.

“There’s very much that thread of common language, of common understanding of the framework,” says Paula Vincent, current chairwoman of the board of trustees. “From my perspective it’s unleashed an entrepreneurial spirit. People feel confident that they can lead, they have the framework they lead from and it’s just how they do business now when addressing day-to-day challenges as well as those big ones like student retention and growth.” 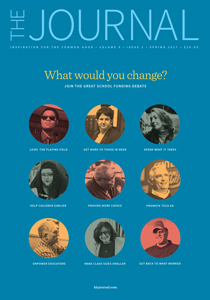 This article was originally published in the Spring 2017 issue of The Journal, a publication of the Kansas Leadership Center. To learn more about KLC, visit http://kansasleadershipcenter.org. For a subscription to the printed edition of The Journal, visit klcjr.nl/amzsubscribe.